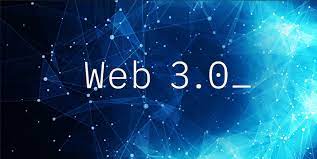 It’s fair to say that the internet is a critical component of modern life. In fact, it would be difficult to comprehend our lives without it, especially in more recent times with a global pandemic that has forced most of us onto the online world—arguably, with greater urgency than ever before—for our occupational, communicative, educational, financial and recreational needs. Indeed, as our reliance on the Web has grown over the last 30 years or so, the Web itself has undergone some seismic metamorphoses during this time. And the next stage of its evolution is now firmly in sight.

Thus far, we have lived through two major iterations of the internet. The first, Web 1.0, represented the internet’s commencement in the late 1980s, comprised of static “read-only” webpages created by relatively few participants. Clearly, this was a major breakthrough, allowing anyone around the world to access published content. But while users could read and browse such webpages, they could not interact with them much further than that. With no search engines available during this iteration, moreover, browsing the World Wide Web (WWW) was not the straightforward practice we know today.

By 2000, however, Web 2.0 was up and running. While the first iteration mainly involved a single flow of information from internet publisher to internet user, this new version allowed significantly greater user interaction and participation. Users could create their own accounts across various applications, meaning they had their own unique identities within the online world. This opened up enormous opportunities for businesses, particularly e-commerce, as new internet companies could inexpensively market their products and services to a global base of potential online consumers. It also meant that anyone anywhere in the world could publish content to a worldwide audience, which, in turn, gave rise to the globally popular trend of blogging and fuelled user-published sites, such as Wikipedia, which became hugely successful. And, of course, one can’t forget Web 2.0’s role in facilitating the rise of social media, initially with such sites as Myspace and then more explosively with Facebook, Twitter and YouTube as the user-generated content revolution switched into full throttle. The development of web technologies such as JavaScript, HTML5 (HyperText Markup Language 5) and CSS3 (Cascading Style Sheets 3) during this time was pivotal in building these interactive web platforms.

Since around 2010, however, the internet’s latest paradigm has been developing steadily: Web 3.0. Also known as the Decentralized Web, Web 3.0 represents the latest generation of internet applications and services powered by distributed ledger technology, the most common being blockchain. It is, however, not a new concept. The inventor of the World Wide Web himself, Tim Berners-Lee, predicted that this version of the internet, which he called the Semantic Web, would be more open, smarter and more autonomous.

Indeed, Web 3.0 mainly focuses on connecting data in a decentralised way, rather than having it stored in centralised repositories, with computers able to interpret information as intelligently as humans. As such, users and machines will be able to connect more seamlessly with data, meaning that artificial intelligence (AI) will play a crucial role in making this version of the internet more intelligent and powerful in terms of its ability to process information. Ultimately, this will enable machines to more granularly interpret the meaning behind the data—or its semantics—to deliver significantly smarter user experiences.

The development of Web 3.0 has, at least in part, been informed by the shortcomings of Web 2.0 and Web 1.0 before it. Arguably, the accumulation of power and control within centralised entities was the clearest example of those shortcomings—and, indeed, remains so to this day. “The Global Financial Crisis of 2007-2008 had far-reaching impacts. It catalyzed an implosion of trust in a number of institutions: the commercial banks whose business practices caused the crisis; the central banks that never saw it coming; and the governments that failed to address it effectively or hold the most irresponsible and negligent individuals to account,” MakerDAO, creator of the popular stablecoin DAI, wrote in April 2020. “The drawbacks of centralized power became more evident, as did the power of technology.”

With such concerns in mind, Web 3.0’s decentralised architecture seeks to address the issues that have stemmed from such problems, including user trust, privacy and transparency. By utilising blockchain networks of decentralised nodes that can validate cryptographically secured transactions, there is no need to rely on a single centralised entity as the source of truth. Instead, self-executing smart contracts can be employed that eliminate the requirement for third parties to be involved.

Of course, acknowledging the pressing need for Web 3.0 requires recognising how important decentralisation has become. “As Web 3.0 networks will operate through decentralized protocols—the founding blocks of blockchain and cryptocurrency technology—we can expect to see a strong convergence and symbiotic relationship between these three technologies and other fields,” according to popular cryptocurrency site CoinMarketCap. “They will be interoperable, seamlessly integrated, automated through smart contracts and used to power anything from micro transactions in Africa, censorship-resistant P2P data file storage and sharing with applications like Filecoin, to completely changing every company conduct and operate their business.”

Many are anticipating the transition from large, centralised entities providing services and access to their platforms in exchange for monetising and profiting from users’ personal data under Web 2.0 to one involving decentralised applications enabling user participation without data monetisation under Web 3.0. Instead of data being owned, then, it is shared, with different applications and services showing different views for the same data. And, perhaps most importantly, users will once more regain ownership and control over their personal data.

Such user benefits will have considerable implications for such areas as social media, through which control of personal data has repeatedly been compromised. “The current internet is an oligopoly market. The existing social media giants not only make huge profits by monopolizing users’ social identities and social data but can also change the rules of the game, losing the open spirit that the internet was originally aimed at,” Carl Huang, a member of the Follow decentralized, autonomous organization—the first decentralized social protocol designed for Web 3.0, recently told blockchain and cryptocurrency publication Cointelegraph. Follow’s blockchain-powered social protocol aims for users to have full control over their own social identities and data. “Openness and sharing are the core principles of the internet. Whether it is building Web 3.0 or developing a large-scale creator economy in the metaverse, new social infrastructures that embody the core demands of the internet are needed. The creation of the Follow protocol is an attempt based on this appeal.”

Three-dimensional (3D) graphics will also be a crucial attribute of Web 3.0, with many anticipating this version of the internet to be a “spatial” web, with digital information existing in space and becoming inseparable from the physical world. The convergence of key technologies such as augmented and virtual reality, 5G networking, the internet of things (IoT), AI (artificial intelligence) and blockchain will underpin this 3D Web that will eventually remove the boundaries between digital content and the physical world. Already we are seeing the first successful 3D designs in websites and applications through computer games, museum guides and real-estate property tours.

IoT will also be fundamental in making Web 3.0 ubiquitous, with a whole host of new smart devices being connected to the Web and thus accessing content. This could mean that, eventually, everyone has access to the internet at all times, thanks to this vast network of internet-connected devices.

Of course, we are not quite at the stage of fully realising this next-generation internet, despite having been in development for more than 10 years. Limitations that still exist particularly regarding data storage and data-processing power mean that scalability presents a pertinent challenge to Web 3.0. Indeed, blockchain technology continues to struggle with scalability issues, although it increasingly seems that it will be a matter of when rather than if it successfully overcomes these current roadblocks.

What’s more, it seems highly unlikely that those giant, centralised entities such as governments and multinational corporations will simply relinquish their control over profit-generating data. In some instances, this data is their very lifeblood and, as such, wresting control of it from them will be far from easy.

Nonetheless, with the decentralisation juggernaut in full flow, it would seem that the opportunity for individuals to take back control from the few corporate behemoths that have dominated the internet thus far is now closer than ever before. And a fairer, more transparent online world awaits us all.